Each year CBDC works with local conservation organisations to run a Bioblitz. The purpose is to record as many different species in a short period of time. These events are free and open to the public and those interested in wildlife whether you are an experienced recorder or just beginning.

Complete beginners can join in guided walks, moth trapping and family friendly activities. If you are more experienced you can come and record on your own or with fellow recorders, and, if you wish to, share you knowledge with others by helping people identify their finds or by leading activities.

Click here to find out details about the event

Oak Tree Animals' Charity are recording their wildlife on iNaturalist.

So, if you cannot make the Bioblitz on the 2nd May but see something when you visit another time, you can still let them know.

Download  (PDF): How to record that wildlife you see

Inspired by the Rusland Horizon Bioblitz, 11 year old Orin organised his own event in July 2019 at the National Trust’s Footprint building near Troutbeck. 162 people joined Orin and his family and together they recorded 573 species.

This was not a typical Bioblitz site with only 22 species records before the event. By the end we had 460 species on the list.

Rusland Horizons highlights included:
• A large orange Ichneumon fly Opheltes glaucopterus – the first time it had been found in Cumbria.
• 3 rare butterflies: Brimstone, Small Heath and the Pearl-bordered Fritillary.
• 2 records of the nationally rare Tabanus sudeticus – the dark giant horsefly. With a body length of 2.5 cm it is the heaviest fly in Europe and has a nasty bite.
• 9 protected and rare species of moths. The Ghost Moth and Pinion-streaked Snout have only been seen a couple of times before in the area.
• The once very common Garden Tiger moth is now a priority species on the UK Biodiversity Action Plan.
• Gyrinus natator is a whirlygig beetle that has become extinct in parts of the UK and is on the UK Red List for endangered species.
• Signs and tracks of Otters, Squirrels, Roe deer, moles, 2 species of shrew.
• Great footage of a badger on the camera trap.
• and a dead grass snake, a slow worm and common lizard – all of which are protected in the UK as their numbers are declining.

Eycott is a new Cumbria Wildlife Trust (CWT) Nature Reserve. The weather on the day was wet and windy – not the best for spotting wildlife. However, members of the public, CWT staff and volunteers and local recorders collected 275 records and identified 125 different species bringing the total list for the site to 760.

The 2015 Bioblitz was held at the RSPB reserve Campfield Marsh. CBDC partnered with the Solway Firth Partnership and RSPB to organise another successful day.

The day was supported by 11 recorders who collected 798 records between them recording 412 species. The wetland site tested our botany recorders’ knowledge of sedges and rushes and the Coleopterists collected several beetles requiring microscopic identification. 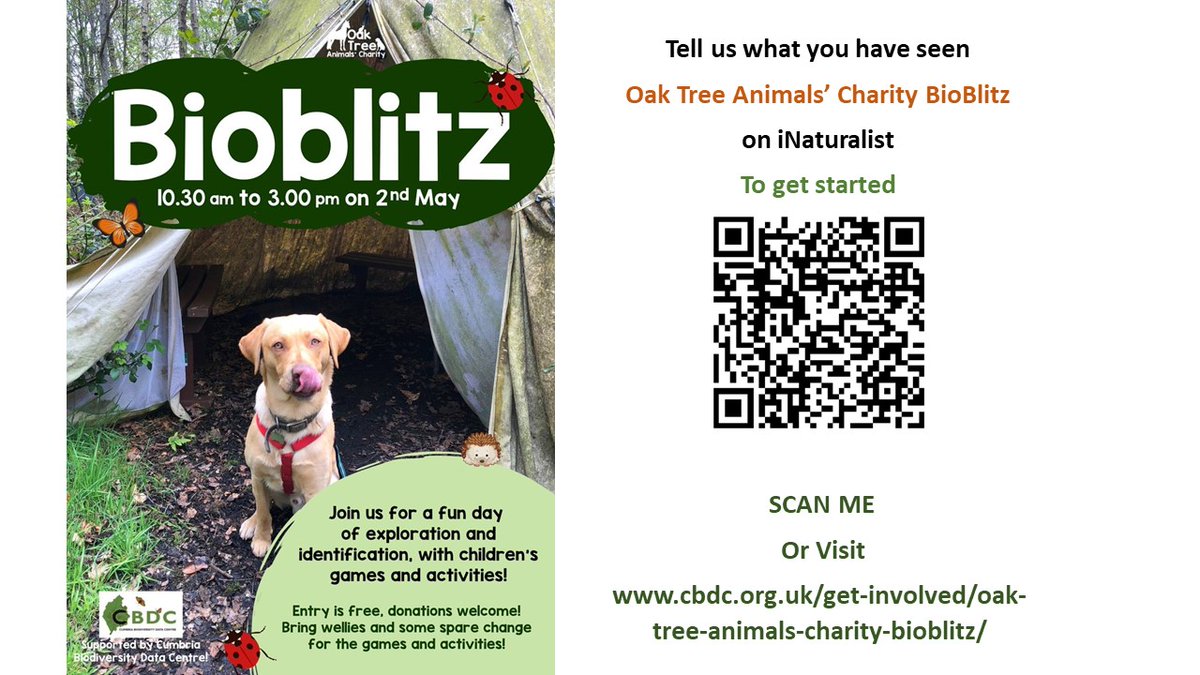 1
0
Biodiversity Data · Thursday, October 28th, 2021 at 5:54am
@CumbriaBDC
🤯 @getcumbriabuzzing https://t.co/VLKIT21YDh
View on Twitter
Matt Shardlow@MattEAShardlow
Efforts to include protection for bees and other pollinators from harmful pesticides in the Environment Bill have run out of steam. 😢
Reflections on first experience of getting UK parliament to take responsibility for post-Brexit pesticide regulation here- https://t.co/YsAsSiVWbb